What is church hurt? help in loving, not harming the wounded 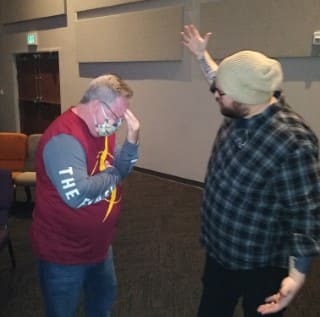 What is Church Hurt? It is the emotional, spiritual, and physical harm caused by a church to others, regardless of intent.

This harm could result from a church’s leadership or the actions of someone who self-identifies as a Christian.

This harm could take the form of an in-person confrontation or an interaction on social media.

It might be one major wound or death by a thousand cuts.

What kind of harm does a Church do to its members?

What is Church Hurt: Harm that the church does to its members.

That harm can take on various forms. For example, someone may have manipulated others for personal profit or power. Someone may have used their position to cover sexual abuse or assault.

Someone may have rejected others because of race, sexual orientation, political affiliation, or economic standing in the community. In addition, someone may have directly or indirectly betrayed a person’s trust.

Sometimes the harm is unintentional, an act of omission or carelessness.

As Christ-followers, we don’t want to take responsibility for our complicity in church hurt. It is easier to blame the problem on someone else.

What type of harm does the Church do to outsiders?

What is Church Hurt: Harm that the church does to outsiders.

Let me explain what I mean with a personal story.

Two fellow employees were debating the subject of living together before marriage.

It wasn’t a debate; it was a one-sided, mean-spirited, public shaming, self-righteous takedown by the church-goer to the non-churchgoing coworker for their behavior.

This verbal altercation lasted for several minutes, with no end in sight, and now everyone was paying attention.

The non-churchgoer meekly contended that they and their significant other were in love and deeply committed to each other.

The church-goer vehemently indicated this was impossible.

At this point, I looked at the non-church-going individual, made eye contact, and said, “You know I believe in marriage, but I do know couples who are not married who are deeply committed to each other.”

The church-goer started to interrupt, but I stared them down and continued.

“Pam and I are committed to each other, but we are also committed to God. That is the reason we have been married for over thirty years and continue to thrive in our relationship.”

The displeased church-goer glared at me, sat down, and went back to their work.
The non-church-goer gave a grateful smile and sat down.

I’ve often thought about that conversation. I’ve replayed it in my mind over and over.

Whether church hurt is intentional or not, the wound still hurts.

Often our most significant wounds result from an accident, a moment of carelessness, or someone’s good intentions that went wrong.

What was the result of our two approaches? The first person left while I earned the right to be heard. Then, over the next several months, I listened and had the opportunity for a deeper conversation about God and marriage.

One morning my non-church-going coworker excitedly approached me to tell me they were getting married in a few months. And they did.

I do not know if our conversation influenced their decision. I like to think it was helpful. But I will never know.

There have been times when I failed spectacularly and harmed others through my self-righteous arrogance.

What do we do when this happens?

I know from personal experience that we begin by acknowledging our responsibility for the harm we caused. But, whether it was intentional or not, wounds still hurt.

We apologize for our behavior, tone, and attitude: we model genuine sorrow and repentance. This means we act differently. Our talk has to match our walk.

Most importantly, we allow time and space for healing. We refrain from rushing the process.

Defining church hurt can empower us to be more thoughtful in the way we engage with others. Jesus said that the world would know us by our unity and love.

Conclusion: It is time for us to acknowledge when we harm others, apologize and change our behavior, and give the wounded time and space for healing.

If you have experienced church hurt, let me offer my sincere apologies. The Church is supposed to be a place of healing and refuge, and there is no valid excuse for the harm done to you by the Church. In time, I hope you will find it in your heart to forgive us and give us another chance to be in your life.