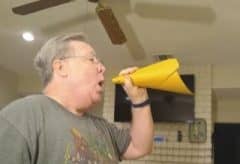 I have met many people who felt it was their obligation to blurt out an uncomfortable truth, but few could skillfully speak the truth in love.

There is a vast difference between these two people. The first has no filter and will destroy everything in its path, whereas the second can offer correction and feedback without destroying a relationship. Their motive in sharing the truth is their love for the individual.

I know how difficult it is to speak the truth in love. One can be misunderstood, rejected, and treated as an enemy for telling the truth.

I know that potential exists for me today. However, I struggle with speaking the truth in love when a spiritual leader falls.

Why is it so hard For me to speak the truth in love When a spiritual leader falls?

Your reasons may be different than mine.

I worry that others will think I am judgmental or harsh toward the fallen leader.

I fear that I will make the situation worse by addressing it.

I know my sin issues, and I am not faultless.

I feel inadequate to address the tension between forgiveness, grace, and consequences.

I secretly hope someone else will say something eloquently and relieve me of my responsibility to speak the truth in love.

And so I remain silent, checking online every day for someone to speak the truth in love and say what I am thinking.

But my silence implies agreement or that I don’t care about the harm done.

Meanwhile, the world outside the Church is watching how you and I will respond.

Will I say that Christians aren’t perfect, just forgiven, and excuse the fallen leader’s sin because of the good done in their name?

Will I bristle when they rightfully point out my boldness to comment on those outside the Church’s wrong behavior and the hypocrisy I demonstrate in dealing with sin within the Church?

What is motivating me to speak the truth in love now?

It is not because I have a desire to defend a spiritual leader or the reputation of the Church.

I am not here to defend or bury any fallen spiritual leader.

I believe in the consequences of wrongdoing, as well as the protection of the vulnerable. I believe in grace.

I am heartbroken for those impacted by a spiritual leader’s fall.

How do we speak the truth in love without doing additional harm to the people impacted by the fall?

Those impacted by the fall include victims and supporters. Each of them requires a different message and tone.

THE VICTIM. The discovery of a leader’s fall is often because of their harm to others.

Too often, the supporting ministry leaders have treated victims as if they were the problem. Not listening and investigating the allegations show an inherent lack of faith that God can protect a falsely accused minister’s reputation.

Telling a victim to be silent about the harm done to them because it will damage the Church or its leadership’s reputation is inherently evil. Covering that behavior with a non-disclosure agreement silences a victim is wrong.

Speaking the truth in love with the victim means acknowledging damage instead of focusing on damage control.

THE SUPPORTER. When the accusations surface, they are dismissed because the individual they know is incapable of such evil. There is an assumption, rather than a presumption, of innocence.

If the accusation is proven true, there is a deep sense of betrayal and embarrassment.

Too often, the Church removes the offender without any explanation. Of course, not every detail needs to be shared. But withholding information is not healthy either.

Passing damaged goods from one pulpit to another is unacceptable.

Speaking the truth in love to supporters hurt by the fallen leader means acknowledging factual allegations and wrongdoing and working to restore and rebuild trust.

Russell Moore has spoken difficult truths to show his love for the Church.

Will you be bold enough to speak the truth in love, even when it is difficult? For related reading, check out Rebranding Christianity in a Crisis.

previousDo Christians have a right to be angry?
next3 REASONS PEOPLE KEEP THEIR ANGER HIDDEN BUT WHY THEY SHOULDN’T