WHAT IS JESUS’ POWERFUL REPLY TO THE CANCEL CULTURE MOVEMENT? 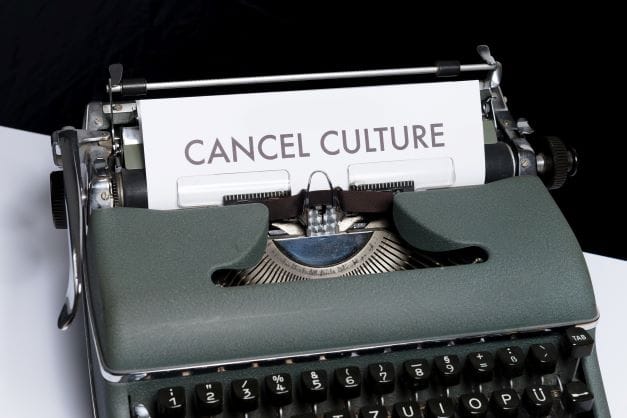 I have to admit that following the canceled culture movement has exhausted me. Every day I am confronted by another story where I am encouraged to express my disapproval and exert pressure through social media posts in the public shaming of an individual.

I am left wondering whether canceling an individual is the right thing to do. But, on the other hand, I am equally afraid of unwittingly condoning criminal behavior and silencing the innocent by my indifference.

Maybe you are asking similar questions.

What Is The Cancel Culture Movement?

It is tough to define. Recognizing that issue, The Pew Research Center surveyed Americans in September 2020 who had heard about “cancel culture” and allowed them to explain what they thought the term meant in their own words.

The most common responses centered around accountability, with 49% of those familiar with the term saying it describes actions people take to hold others accountable.

A small share who mentioned accountability in their definitions also discussed how these actions could be misplaced, ineffective, or overtly cruel.

Some 14% of adults described it as a form of censorship, such as restricting free speech or erasing history.

A similar share (12%) characterized cancel culture as mean-spirited attacks used to cause others harm.

Additionally, Of those polled, 10% included five additional distinct responses. Cancel culture was either an inaccurate portrayal of people’s behavior, an excuse for people to dismiss anyone they disagree with, a tool to bring attention to issues such as racism and sexism, consequences for those who have challenged the status quo, or an assault on traditional American values.

Is The Cancel Culture Movement About Accountability, Punishment, Censorship, Or Something Else?

Is the cancel culture movement a good or a bad thing? It depends on who you ask.

The Pew Research Center survey responses indicate that some believe that the cancel culture movement is about accountability, while others believe it is about punishment or censorship.

In the survey, people on both sides of the issue had an opportunity to explain why they see calling out others on social media for potentially offensive content as more likely to be either a form of accountability or punishment.

Of these, some 17% of Americans who say that calling out others on social media holds people accountable say it can be a teaching moment that helps people learn from their mistakes and do better in the future.

Among those who say calling out others unjustly punishes them, a similar share (18%) say it’s because people are not taking the context of a person’s post or the intentions behind it into account before confronting that person.”

However you define it, most people would agree that canceling someone includes three elements: the expression of disapproval, the exertion of social pressure, and the public shaming of an individual.

What, if anything, does Jesus have to say to the canceled and the cancel culture movement?

How can we be confident of what Jesus would say today to The Cancel Culture Movement?

First, the Cancel Culture Movement is not new. We live in a culture that thrives on publicly shaming people for real and perceived failures and missteps. “Although it might seem like a recent phenomenon, cancel culture has been described as a modern form of ostracism – an Ancient Greek practice dating back over two thousand years that saw an individual sent into exile for a decade due to the results of a popular vote.”

In John 8, we see the three characteristics of modern cancel culture described with the woman caught in adultery.

Third, we know what Jesus would say to the Cancel Culture Movement based on what He says on this occasion.

First, the religious leaders expressed their disapproval to Jesus when they brought a woman caught in the act of adultery.

Second, the religious leaders exerted social pressure. They didn’t ask this privately. Instead, they made this a public confrontation that everyone could see and hear.

Third, the religious leaders made a public spectacle of shaming the woman. They stirred up the crowd and sought Jesus’ approval to cancel her life by stoning her.

Before Jesus spoke to the leaders of this ancient Cancel Culture, he did something unusual.

The religious leaders, crowd, and canceled women waited to hear what Jesus would say. But, instead, he knelt and drew in the sand.

When they grew impatient and demanded an answer, Jesus stood up and said to the mob leaders, “Let the one who has never sinned cast the first stone!”

Then he knelt and began to write in the dust. Then, one by one, the accusers left the scene. (Some scholars suggest that Jesus was writing the accusers’ sins in the sand.)

But Jesus wasn’t done, he had something to say to the Canceled, and he said it while standing in the middle of the crowd that remained.

Jesus asked her, “Where are your accusers? Didn’t even one of them (stay too) condemn you? Then Jesus said, “Neither do I condemn you.” And then he commanded her to, “Go and sin no more.’

Jesus did indicate that she needed to change her behavior. He held her accountable for her future actions, but he offered grace for her prior mistakes. He canceled the punishment of her sin.

If you are longing for justice that has been postponed or denied, remember that God is a just God. God knows your heart, and He is interested in justice as well. He knows that you are speaking up to protect others from potential harm.

Please remember that no one should ever discourage you from calling for an offender’s accountability for criminal wrongdoing.

If others have canceled you, remember that Jesus does not condemn you. He knows when the accusations against you are false. He understands the deep hurt you feel while being declared guilty when you are innocent of wrongdoing. (He has personal experience with this.)

He knows where you have blown it, acknowledged it, and requested forgiveness. Unlike the Cancel Culture, he will not hold your past failures against you. He offers grace instead of condemnation.

If you have canceled others and acted maliciously, remember that God graciously still forgives. So maybe it’s time for you to take steps to restore that relationship.

Please feel free to share this article with others. Have a great week.

*This article was previously published on 05/31/21 and updated for clarity with additional information and research.

previousDomestic Violence Advocate? 9 Ways For Men To Help, Not Harm
nextWhy are we so hesitant to talk about trauma as a nation?